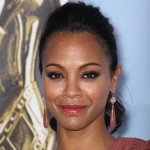 Zoe Saldana, sometimes stylized Zoë Saldaña, is an American actress. She had her breakthrough role in the 2000 film Center Stage and later gained prominence for her roles as Anamaria in Pirates of the Caribbean: The Curse of the Black Pearl and Uhura in the 2009 film Star Trek, and a starring role as Neytiri in James Cameron's Avatar. She also had a lead role in the action film Colombiana.
Zoe Saldana was born Zoe Yadira Saldaña Nazario or Zoe Yadira Saldana Nazario in Passaic, New Jersey. Her father, Aridio Saldaña, is Dominican, and her mother, Asalia Nazario, is Puerto Rican. Her first languages are English and Spanish. She spent the majority of her early childhood growing up in Queens, New York. After her father died in a car accident, her mother moved the family to the Dominican Republic. There Saldana discovered her love of dance and soon enrolled in the ECOS Espacio de Danza Academy; she studied ballet, jazz, and modern Latin dance. The family returned to Queens after her sophomore year in high school.
At age 17, she began performing with the Faces theater troupe, which put on plays geared towards providing positive messages for teens, via themes dealing with issues such as substance abuse and sex. Concurrently, she performed with the New York Youth Theater; her appearance in their production of Joseph and the Technicolor Dreamcoat led a talent agency to recruit her. Her previous dance training, and her acting experience, helped her land her first big screen role as Eva, the talented and headstrong ballet dancer in the 2000 film Center Stage.