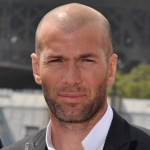 Zinedine Zidane is a retired French footballer. Widely regarded as one of the greatest players of all time, Zidane was the leading figure of a generation of French players that won the 1998 World Cup and 2000 European Championship. After a brief international retirement, he returned to the national team in 2005 and captained France to the 2006 World Cup Final where he won the Golden Ball as the tournament's most outstanding player.
At club level Zidane won the La Liga and the UEFA Champions League with Real Madrid, two Serie A league championships with Juventus, an Intercontinental Cup, and a UEFA Super Cup each with both aforementioned sides. He is one of only three players to have been FIFA World Player of the Year three times. He also won the Ballon d'Or in 1998. He retired from professional football after the 2006 World Cup.
Zidane was born as the youngest of five siblings. Zidane's father Smaïl worked as a warehouseman at a department store, often on the night shift, while his mother was a housewife. The family lived in so small a tower-block apartment in the housing complex that he, his parents, three brothers and one sister had to sit down to eat in shifts. Yet, due to his father's steady job, the family lived a reasonably comfortable life by the standards of the neighbourhood, which was notorious throughout Marseille for its high crime and unemployment rates.
It was at La Castellane that Zidane had his earliest introduction to football, joining in at the age of five, in football games that the neighbourhood's children played on the Place Tartane, an 80-by-12-yard plaza that served as the main square of the housing complex. In July 2011, Zidane named Blaž Slišković, Enzo Francescoli and Jean-Pierre Papin as his idols while growing up