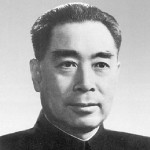 Zhou Enlai was the first Premier of the People's Republic of China, serving from October 1949 until his death in January 1976. Zhou served under Mao Zedong and was instrumental in consolidating the control of the Communist Party's rise to power, forming foreign policy, and developing the Chinese economy.
A skilled and able diplomat, Zhou served as the Chinese foreign minister from 1949 to 1958. Advocating peaceful coexistence with the West after the stalemated Korean War, he participated in the 1954 Geneva Conference and helped orchestrate Richard Nixon's 1972 visit to China. He helped devise policies regarding the bitter disputes with the U.S., Taiwan, the Soviet Union (after 1960), India and Vietnam. Zhou is best known as the long-time top aide to Mao Zedong, specializing in foreign policy. Their contrasting personalities made them an effective team, according to Henry Kissinger, the American diplomat who had extensive dealings with both men.
Largely due to his expertise, Zhou was able to survive the purges of other top officials during the Cultural Revolution of the 1960s. His attempts at mitigating the Red Guards' damage and his efforts to protect others from their wrath made him immensely popular in the Revolution's later stages. As Mao Zedong's health began to decline in 1971 and 1972, Zhou and the Gang of Four struggled internally over leadership of China. Zhou's health was also failing, however, and he died eight months before Mao on 8 January 1976. The massive public outpouring of grief in Beijing turned to anger towards the Gang of Four, leading to the Tiananmen Incident. Although succeeded by Hua Guofeng, it was Deng Xiaoping, Zhou's ally, who was able to outmaneuver the Gang of Four politically and eventually take Mao's place as Paramount leader by 1977.