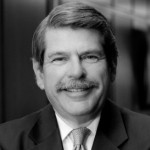 Zev Yaroslavsky is a Los Angeles County, California, politician who served on the Los Angeles City Council from 1975 through 1994 and has been a member of the County Board of Supervisors since then. He has been active in the areas of transportation, the environment, health care and cultural affairs. In the 1970s, he was a leader in opposing Soviet antipathy toward Jews in the USSR.
Zev Yaroslavsky, the son of David and Minna Yaroslavsky, was born on December 21, 1948, in Los Angeles. He and his older sister, Shimona, were the children of Jewish immigrants from Russia and grew up in a Zionist household in Boyle Heights. His father was a founder of the Hebrew Teachers Union in Los Angeles, and both parents, who were born in Ukraine, were founders of Habonim of Los Angeles, a labor Zionist youth movement. Yaroslavsky recalled that his parents spoke to their children only in Hebrew to prepare them for emigrating to Israel. They took their children to that country when Shimona was thirteen and Zev was five. Shimona later emigrated permanently.
Yaroslavsky attended Melrose Avenue Elementary School, Bancroft Junior High School and Fairfax High School. He earned a bachelor of arts in history and economics from UCLA in 1971 and a master of arts in history, specializing in the British Empire, from the same school in 1972. Afterward, he taught Hebrew at temples in Pasadena and Bel Air.