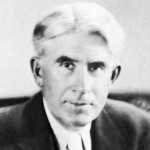 Zane Grey was an American author best known for his popular adventure novels and stories that presented an idealized image of the Old West. Riders of the Purple Sage (1912) was his bestselling book. In addition to the success of his printed works, they later had second lives and continuing influence when adapted as films and TV productions. As of 2007, 110 films, one TV episode, and a series, Dick Powell's Zane Grey Theater, had been made that were based loosely on his novels and short stories.
Pearl Zane Gray was born January 31, 1872, in Zanesville, Ohio. It has been suggested that his name derives from the "Pearl Grey" color favored by Queen Victoria in her dress.[citation needed] He was the fourth of five children born to Alice "Allie" Josephine Zane, whose English Quaker immigrant ancestor Robert Zane came to America in 1673, and her husband, Lewis M. Gray, a dentist. His family changed the spelling of their last name to "Grey" after his birth. Later Grey dropped Pearl and used Zane as his first name. He grew up in Zanesville, a city founded by his maternal ancestor Ebenezer Zane, a American Revolutionary War patriot; from an early age, the boy was intrigued by history. Grey developed interests in fishing, baseball, and writing, all which contributed to his writing success. His first three novels recounted the heroism of his ancestors who fought in the American Revolutionary War.
After graduating, Grey established his practice in New York City under the name of Dr. Zane Grey in 1896. It was a competitive area but he wanted to be close to publishers. He began to write in the evening to offset the tedium of his dental practice. He struggled financially and emotionally. Grey was a natural writer but his early efforts were stiff and grammatically weak. Whenever possible, he played baseball with the Orange Athletic Club in New Jersey, a team of former collegiate players that was one of the best amateur teams in the country.