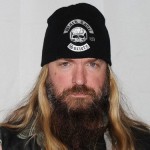 Zachary Phillip Wylde, best known by the stage name Zakk Wylde, is an American musician, songwriter, and occasional actor who is best known as the former guitarist for Ozzy Osbourne and founder of the heavy metal band Black Label Society. He was the lead guitarist and vocalist in Pride & Glory, who released one self-titled album in 1994 before disbanding. As a solo artist he released Book of Shadows in 1996.
Wylde was born in Bayonne, New Jersey. Wylde started playing the guitar at the age of 14 and worked at Silverton Music in Silverton, New Jersey. He grew up in Jackson, New Jersey, and went to Jackson Memorial High School, where he graduated in 1985. Wylde has stated that he would practice playing the guitar as much as 12 hours per day and often would play the guitar almost non-stop between coming home from school and leaving for school the next morning, then sleeping through the school day.
Growing up, Wylde played locally with his first band, "Stone Henge", then later with local Jersey band Zyris. Years later, he landed the role as lead guitarist and co-writer for Ozzy Osbourne. He sent Ozzy a demo tape in 1987 and was hired to replace Jake E. Lee. Lee had replaced the deceased Randy Rhoads, Ozzy's principal guitarist in the post-Black Sabbath period, beginning in late 1979. Rhoads remains Wylde's foremost guitar-playing and stagecraft influence.