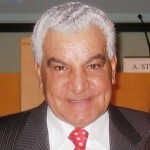 Hawass was born in Damietta, Egypt. He originally intended to become a lawyer, but then studied Greek and Roman archaeology at Alexandria University, where he obtained a B.Sc. degree. He obtained a diploma in Egyptology at the University of Cairo. In 1987 he received his PhD degree from the University of Pennsylvania, where he studied as a Fulbright Fellow.
After 1988 Hawass taught Egyptian archaeology, history and culture, mostly at the American University in Cairo and the University of California, Los Angeles. In 1993 he left his position as Chief Inspector of the Giza Pyramid Plateau. According to Hawass, he resigned; others claim, however, that he was fired because a valuable ancient "statue" under the custody of Hawass was stolen from Giza. He was reinstated as Chief Inspector in early 1994. In 1998 he was appointed as director of the Giza Plateau. In 2002 he was appointed Secretary General of the Egyptian Supreme Council of Antiquities.
When U.S. President Barack Obama was in Cairo in June 2009 Hawass gave him personal tours of the sites of ancient Egypt. At the end of 2009 he was promoted personally by President Hosni Mubarak to the post of Vice Minister of Culture.
In the midst of the 2011 Egyptian protests, Hawass arrived at the Egyptian Museum on January 29, 2011 to find that a number of cases had been broken into and a number of antiquities damaged. Police later secured the museum. Hawass was reported to have faxed a colleague that 13 cases were destroyed and to have said, "My heart is broken and my blood is boiling." Hawass later told the New York Times that thieves looking for gold broke 70 objects, including two sculptures of Tutankhamen, and took two skulls from a research lab before being stopped as they were leaving the museum.
Hawass has written and co-written many books relating to Egyptology, including King Tutankhamun: The Treasures from the Tomb, published to coincide with a major exhibition in the UK. He has also written an article on Tutankhamun in Ancient Egypt magazine, and has written several articles for this bi-monthly UK-based magazine in the past.
Hawass is a regular columnist for Egypt Today magazine and the online historical community, Heritage Key. He has narrated several videos on Egyptology, including a series on Tutankhamun.