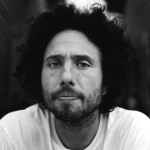 Zacarías Manuel "Zack" de la Rocha is an American rapper, musician, poet, and activist best known as the vocalist and lyricist of Rage Against the Machine.
As a teenager, de la Rocha became a vegetarian, saying in 1989: "I think vegetarianism is really great, and I stand really strongly behind it." When asked why, he explains: "Inside me, I think that an animal goes through a lot of pain in the whole cycle of death in the slaughterhouse; just living to be killed. That whole situation is really messed up for animals, growing up in those little cooped-up pens. I just don't think its worth eating that animal. I think animals should be free. There's so much other food out there that doesn't have to involve you in that cycle of pain and death."
While attending junior high school, de la Rocha became involved in the punk scene and played guitar for a band called Juvenile Expression with Tim Commerford. His interest in bands like The Clash, The Sex Pistols, and Bad Religion turned into an appreciation for other bands like Minor Threat, Bad Brains, and The Teen Idles. Soon after entering high school, Zack joined the straight edge band Hardstance.
De la Rocha and Hardstance bassist Mark Hayworth eventually formed the hardcore band Inside Out, which gained a large national underground following. They released a single record, No Spiritual Surrender, on Revelation Records in 1990 before breaking up. In de la Rocha's words, Inside Out was "about completely detaching ourselves from society to see ourselves as...as spirits, and not bowing down to a system that sees you as just another pebble on a beach. I channeled all my anger out through that band."