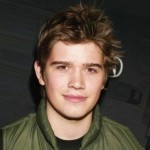 Zachary Walker "Zac" Hanson is an American musician, best known as a member of the pop band Hanson. He plays drums, percussion, piano, guitar and also sings back-up and lead vocals. He was the lead singer on "Go", the second single from The Walk.
Hanson was born on October 22, 1985 in Arlington, Virginia, and grew up in Tulsa, Oklahoma. He is the third child of Walker and Diana Hanson. In 1992, he and his brothers Isaac and Taylor formed a band called the Hanson Brothers (later shortened to Hanson). In May 1997, the band released their first major album (third studio album), Middle of Nowhere with Mercury Records. The first single, "MMMBop", made it to number one on the Billboard Hot 100 chart. Hanson is one of the youngest artists ever to have a number one single (UK & US charts), second only to Michael Jackson.
After releasing three albums through the record company Island Def Jam (formerly Mercury Records), the band parted ways with the label in 2003 due to irreconcilable differences and formed their own independent label, 3CG Records.
Hanson, at age 12, was the second youngest person ever to be nominated for a Grammy award (second to Michael Jackson). He holds the title of youngest songwriter nominated for a Grammy (same year).