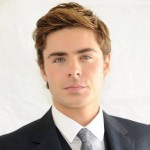 Zachary David Alexander "Zac" Efron is an American actor. He began acting professionally in the early 2000s and became known with his lead roles in the Disney Channel Original Movie High School Musical, the WB series Summerland, and the 2007 film version of the Broadway musical Hairspray. Efron has since starred in the films 17 Again, Me and Orson Welles, Charlie St. Cloud, and New Year's Eve, and is due to star in The Lucky One.
Efron was born in San Luis Obispo, California, and later moved to Arroyo Grande, California. His father, David Efron, is an electrical engineer at a power station, and his mother, Starla Baskett, is a former secretary who worked at the same power plant. Efron has a younger brother, Dylan, and had, as he described it, a "normal childhood" in a middle class family. He is an agnostic, having never been religious. His surname, "Efron", means "lark" in Hebrew.
Efron graduated from Arroyo Grande High School in 2006 and was then accepted into the University of Southern California, but has deferred his enrollment to work on film projects. He also attended Pacific Conservatory of the Performing Arts, a community college located in Santa Maria, California, which provided him with the opportunity to perform as a "young player" during the years of 2000 and 2001.