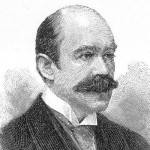 Born in Stepney in London's East End, Walter Pater was the second son of Richard Glode Pater, a physician who had moved to London in the early 19th century to practise medicine among the poor. Dr Pater died while Walter was an infant and the family moved to Enfield, London. Walter attended Enfield Grammar School and was individually tutored by the headmaster.
In 1853 he was sent to The King's School, Canterbury, where the beauty of the cathedral made an impression that would remain with him all his life. He was fourteen when his mother, Maria Pater, died in 1854. As a schoolboy Pater read John Ruskin's Modern Painters, which helped inspire his lifelong attraction to the study of art and gave him a taste for well-crafted prose. He gained a school exhibition, with which he proceeded in 1858 to Queen’s College, Oxford.
As an undergraduate Pater was a "reading man", with literary and philosophical interests beyond the prescribed texts. Flaubert, Gautier, Baudelaire and Swinburne were among his early favourites. Visiting his aunt and sisters in Germany during the vacations he learned German and began to read Hegel and the German philosophers. The scholar Benjamin Jowett was struck by his potential and offered to give him private lessons. In Jowett's classes, however, Pater was a disappointment; he took a Second in literae humaniores in 1862. As a boy Pater had cherished the idea of entering the Anglican Church, but at Oxford his faith in Christianity had been shaken. In spite of his inclination towards the ritual and aesthetic elements of the church, he had little interest in Christian doctrine and did not pursue ordination. After graduating, Pater remained in Oxford and taught Classics and Philosophy to private students. His years of study and reading now paid dividends: he was offered a classical fellowship in 1864 at Brasenose on the strength of his ability to teach modern German philosophy, and he settled down to a university career.