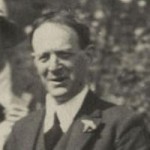 He was born in Kent, descended from a family of French Huguenots, and was educated at St Paul's Cathedral School.
His first book, Songs of Childhood, was published under the name Walter Ramal. De la Mare was also a significant writer of ghost stories. John Clute comments that "in his long career, De la Mare seems to have published about 100 stories, of which about eighty-five have been collected. At least forty of these have supernatural content". Many of De la Mare's ghost stories can be found in the collections Eight Tales, The Riddle and Other Stories, The Connoisseur and Other Stories, On the Edge and The Wind Blows Over. His complete short stories have now been published in three volumes issued by Giles de la Mare Publishers, London.
He worked in the statistics department of the London office of Standard Oil for eighteen years while struggling to bring up a family, but nevertheless found enough time to write, and, in 1908, through the efforts of Sir Henry Newbolt he received a Civil List pension which enabled him to concentrate on writing. De la Mare also wrote two supernatural novels, Henry Brocken (1904) and The Return (1910). For children, De la Mare wrote the fairy tale The Three Mulla Mulgars (1910, AKA The Three Royal Monkeys), praised by literary historian Julia Briggs as a "neglected masterpiece" and by critic Brian Stableford as a "classic animal fantasy". Gary William Crawford has described de la Mare's supernatural fiction for adults as being "among the finest to appear in the first half of this century". Boucher and McComas, however, dismissed his 1949 Collected Tales, saying "we freely admit we find Mr. de la Mare's self-consciously subtle wordiness unreadable."
In 1947 he suffered from a coronary thrombosis and died of another in 1956. His ashes are buried in the crypt of St Paul's Cathedral, where he had once been a choirboy.