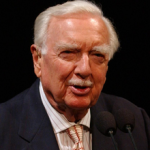 Cronkite was born in Saint Joseph, Missouri. He attended junior high school at Lanier Junior High School and high school at San Jacinto High School, where he edited the high school newspaper. He was a member of the Boy Scouts. He attended college at the University of Texas at Austin (UT), entering in the Fall term of 1933, where he worked on the Daily Texan and became a member of the Nu chapter of the Chi Phi Fraternity. He also was a member of the Houston chapter of DeMolay, a Masonic fraternal organization for boys. While attending UT, Cronkite had his first taste of performance, appearing in a play with fellow students Eli Wallach and Ann Sheridan.
He dropped out of college in his junior year, in the Fall term of 1935,[13] after starting a series of newspaper reporting jobs covering news and sports. He entered broadcasting as a radio announcer for WKY in Oklahoma City, Oklahoma. In 1936, he met his future wife, Mary Elizabeth Maxwell, while working as the sports announcer for KCMO (AM) in Kansas City, Missouri. His broadcast name was "Walter Wilcox". He would explain later that radio stations at the time did not want people to use their real names for fear of taking their listeners with them if they left. In Kansas City, he joined the United Press in 1937. He became one of the top American reporters in World War II, covering battles in North Africa and Europe. He was one of eight journalists selected by the United States Army Air Forces to fly bombing raids over Germany in a B-17 Flying Fortress part of group called the Writing 69th. He also landed in a glider with the 101st Airborne in Operation Market-Garden and covered the Battle of the Bulge. After the war, he covered the Nuremberg trials and served as the United Press main reporter in Moscow for two years.
In late June 2009, Cronkite was reported to be terminally ill. He died on July 17, 2009, at his home in New York City, at the age of 92.