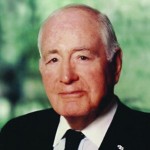 Walter Annenberg was born to a Jewish family in Milwaukee, Wisconsin. Walter attended high school at the Peddie School in Hightstown, New Jersey, graduating in 1927. He went on to college at the Wharton School of the University of Pennsylvania, not graduating. While in college he was a member of Zeta Beta Tau, a traditionally Jewish fraternity.
In 1942, after his father's death, Annenberg took over the family businesses, making successes out of some that had been failing. He bought additional print media as well as radio and television stations, resulting in great success. One of his most prominent successes was the creation of TV Guide in 1952, which he started against the advice of his financial advisers. He also created Seventeen magazine. During the 1970s TV Guide was making between $600,000 – $1,000,000 profit per week.
While Annenberg ran his publishing empire as a business, he was not afraid to use it for his own ends. One of his publications, The Philadelphia Inquirer, was influential in ridding Philadelphia of its largely corrupt city government in 1949. It attacked McCarthyism in the 1950s, and campaigned for the Marshall Plan following World War II. Even while an active businessman, Annenberg had an interest in public service. In 1953, he became one of the founding trustees of Eisenhower Fellowships. After Richard M. Nixon was elected President, he appointed Annenberg as ambassador to the Court of St. James's in the United Kingdom. In 1969, under pressure after the Shapp controversy, Annenberg sold The Inquirer and the Philadelphia Daily News, which he bought in 1957, to Knight Newspapers for US$55 million. After being appointed as ambassador, he became quite popular in Britain, eventually being made an honorary knight of the Order of the British Empire (KBE).
Annenberg died at his home in Wynnewood, Pennsylvania on October 1, 2002 from complications dealing with pneumonia; he was 94 years old.