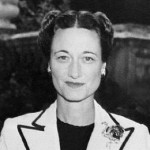 Wallis, Duchess of Windsor, previously Wallis Simpson, was an American socialite whose third husband, Prince Edward, Duke of Windsor, formerly King Edward VIII of the United Kingdom and the Dominions, abdicated his throne to marry her.
Wallis's father died shortly after her birth, and she and her widowed mother were partly supported by their wealthier relatives. Her first marriage, to U.S. naval officer Win Spencer, was punctuated with periods of separation and eventually ended in divorce. In 1934, during her second marriage, to Ernest Simpson, she allegedly became the mistress of Edward, Prince of Wales. Two years later, after Edward's accession as King, Wallis divorced her second husband and Edward proposed to her.
The King's desire to marry a woman with two living ex-husbands threatened to cause a constitutional crisis in the United Kingdom and the Dominions. This prospect ultimately led to the King's abdication in December 1936 to marry "the woman I love". After the abdication, the former king was created Duke of Windsor by his brother George VI. Edward married Wallis six months later, after which she was formally known as the Duchess of Windsor, without the style "Her Royal Highness".
Before, during and after World War II, the Duke and Duchess of Windsor were suspected by many in government and society of being Nazi sympathisers. In the 1950s and 1960s, she and the Duke shuttled between Europe and the United States, living a life of leisure as society celebrities. After the Duke's death in 1972, the Duchess lived in seclusion and was rarely seen in public. Her private life has been a source of much speculation, and she remains a controversial figure in British history.