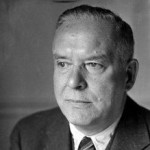 Wallace Stevens was an American Modernist poet. He was born in Reading, Pennsylvania, educated at Harvard and then New York Law School, and spent most of his life working as a lawyer for the Hartford insurance company in Connecticut.
His best-known poems include "Anecdote of the Jar", "Disillusionment of Ten O'Clock", "The Emperor of Ice-Cream", "The Idea of Order at Key West", "Sunday Morning", "The Snow Man", and "Thirteen Ways of Looking at a Blackbird", all of which appear in his Collected Poems for which he won the Pulitzer Prize for Poetry in 1955.
The son of a prosperous lawyer, Stevens attended Harvard as a non-degree special student, after which he moved to New York City and briefly worked as a journalist. He then attended New York Law School, graduating in 1903. On a trip back to Reading in 1904 Stevens met Elsie Viola Kachel, a young woman who had worked as a saleswoman, milliner, and stenographer. After a long courtship, he married her in 1909 over the objections of his parents, who considered her lower-class. As The New York Times reported in an article in 2009, "Nobody from his family attended the wedding, and Stevens never again visited or spoke to his parents during his father’s lifetime". A daughter, Holly, was born in 1924. She later edited her father's letters and a collection of his poems.
In 1913, the Stevenses rented a New York City apartment from sculptor Adolph A. Weinman, who made a bust of Elsie. Her striking profile was later used on Weinman's 1916-1945 Mercury dime design and possibly for the head of the Walking Liberty Half Dollar. In later years Elsie Stevens began to exhibit symptoms of mental illness and the marriage suffered as a result, but the Stevenses never divorced.