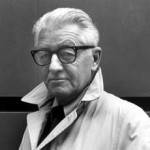 Wallace Earle Stegner was an American historian, novelist, short story writer, and environmentalist, often called "The Dean of Western Writers". He won the Pulitzer Prize for Fiction in 1972.
Stegner was born in Lake Mills, Iowa, and grew up in Great Falls, Montana, Salt Lake City, Utah, and southern Saskatchewan, which he wrote about in his autobiography Wolf Willow. Stegner says he "lived in twenty places in eight states and Canada". Stegner summered in Greensboro, Vermont. While living in Utah, he joined a Boy Scout troop at an LDS Church and earned the Eagle Scout award. He received a B.A. at the University of Utah in 1930. He also studied at the Iowa Writers' Workshop at the University of Iowa, where he received a master's degree in 1932 and a doctorate in 1935.
In 1934, Stegner married Mary Stuart Page. For 59 years they shared a 'personal literary partnership of singular facility,' in the words of Arthur Schlesinger Jr. Stegner died in Santa Fe, New Mexico, on April 13, 1993, from injuries suffered in an automobile accident on March 28, 1993
Stegner's son, Page Stegner, is a novelist, essayist nature writer and professor emeritus at University of California, Santa Cruz. Page is married to Lynn Stegner, a novelist. Page co-authored "American Places" and edited the 2008 Collected Letters of Wallace Stegner.