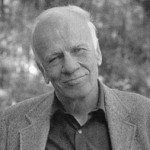 Walker Percy was an American Southern author whose interests included philosophy and semiotics. Percy is known for his philosophical novels set in and around New Orleans, Louisiana, the first of which, The Moviegoer, won the National Book Award for Fiction in 1962. He devoted his literary life to the exploration of "the dislocation of man in the modern age." His work displays a unique combination of existential questioning, Southern sensibility, and deep Catholic faith.
Percy was born in Birmingham, Alabama as the oldest son of three boys, to LeRoy Walker and Martha Susan Phinizy. His father's Mississippi Protestant family included his uncle LeRoy Percy, a U.S. Senator, and LeRoy Pope Percy, a Civil War hero. Prior to Percy's birth, in 1917, his grandfather killed himself with a shotgun, setting a family pattern of emotional struggle and deaths that would haunt Percy throughout his life.
In 1929 when Percy was 13, his father committed suicide by shotgun. His mother took the family to her mother's in Athens, Georgia. Two years later, his mother died in a car crash when she drove off a country bridge and into Deer Creek near Leland, Mississippi, an accident which Percy regarded as another suicide. Walker and his two younger brothers, LeRoy (Roy) and Phinizy (Phin) , moved to Greenville, Mississippi, where their paternal uncle William Alexander Percy, a bachelor lawyer and poet, became their guardian and adopted them.
Percy was raised an agnostic, though nominally affiliated with a theologically liberal Presbyterian church. "Uncle Will" introduced him to many writers and poets, and to a neighboring boy his own age: Shelby Foote, who became his life-long best friend. Later, he and his wife would both join the Roman Catholic Church. Percy insisted on being confirmed with the children, as a sign of his new life.