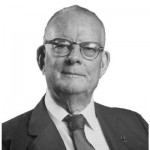 William Edwards Deming was an American statistician, professor, author, lecturer and consultant. He is perhaps best known for his work in Japan. There, from 1950 onward, he taught top management how to improve design, product quality, testing, and sales through various methods, including the application of statistical methods.
In 1917, he enrolled in the University of Wyoming at Laramie, graduating in 1921 with a BSc in electrical engineering. In 1925, he received an M.S. from the University of Colorado, and in 1928, a Ph.D. from Yale University. Both graduate degrees were in mathematics and mathematical physics. Deming worked as a mathematical physicist at the United States Department of Agriculture (1927–39), and was a statistical adviser for the United States Census Bureau (1939–45). He was a professor of statistics at New York University's graduate school of business administration (1946–1993), and he taught at Columbia University's graduate School of business (1988–1993). He also was a consultant for private business.
In 1927, Deming was introduced to Walter A. Shewhart of the Bell Telephone Laboratories by Dr. C.H. Kunsman of the United States Department of Agriculture (USDA). Deming found great inspiration in the work of Shewhart, the originator of the concepts of statistical control of processes and the related technical tool of the control chart, as Deming began to move toward the application of statistical methods to industrial production and management. Shewhart's idea of common and special causes of variation led directly to Deming's theory of management. Deming saw that these ideas could be applied not only to manufacturing processes but also to the processes by which enterprises are led and managed. This key insight made possible his enormous influence on the economics of the industrialized world after 1950.
Deming made a significant contribution to Japan's later reputation for innovative high-quality products and its economic power. He is regarded as having had more impact upon Japanese manufacturing and business than any other individual not of Japanese heritage. Despite being considered something of a hero in Japan, he was only just beginning to win widespread recognition in the U.S. at the time of his death.