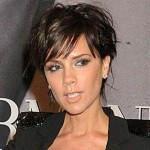 Beckham was born at the Princess Alexandra Hospital in Harlow, Essex and raised in Goffs Oak, Hertfordshire.Beckham attended St. Mary's High School in Cheshunt. She was embarrassed by her family's wealth and often begged her father not to drop her off outside the school in their Rolls Royce. Beckham was frequently bullied and often felt treated like an outsider. She later explained that she had never made any friends and the other children would throw rocks at her.In 1980, when Beckham was 7 years old, she watched the musical Fame and subsequently made the decision to pursue a music career. Jacqueline and Anthony Adams enrolled her at Jason Theatre School. In 1991, Beckham attended Laine Theatre Arts in Epsom, Surrey and studied dance and modelling. Eventually, she became a member of a band called Persuasion.
Beckham auditioned for a March 1993 advertisement in The Stage which required girls who were "street smart, extrovert, ambitious and able to sing and dance". In 1994, Beckham joined the all-female group, the Spice Girls. In the recordings before her marriage, she is credited with her maiden name as Victoria Adams. The group's first single was called "Wannabe" (1996), and she worked alongside Geri Halliwell, Emma Bunton, Melanie Brown and Melanie Chisholm. It went to number one in the United Kingdom and United States, and another 29 countries. It was followed by nine further number one singles from their albums Spice, Spiceworld and Forever. Each member of the group received a nickname from the media. Beckham was named "Posh Spice". The group was one of the most successful pop acts of the 1990s, selling over fifty-five million records worldwide. After the release of their third album, Forever, which was far less successful than their previous two albums, the Spice Girls stopped recording, leading Beckham to try to build a solo career.
In 2007, the Spice Girls reformed and announced plans to embark upon a reunion tour, from which they were said to have earned £10 million each. Victoria had previously stated that she and her former Spice colleagues were enjoying their solo careers in various fields, saying "We're all still doing our own thing." Their "Greatest Hits" album was released in early November 2007 and the tour began on 2 December 2007. At its advent, Beckham said "I wanted my children to see that Mummy was a pop star. It was the last opportunity for them to stand in a crowd full of people screaming for the Spice Girls."