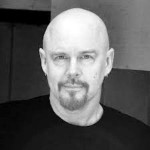 Robert Paul "Tad" Williams born in San Jose, California. Tad is an American writer. He is the author of several fantasy and science fiction novels, including Tailchaser's Song, the Memory, Sorrow, and Thorn series, the Otherland series, and The War of the Flowers. He published the first volume of his Shadowmarch series in November 2004. The second volume, Shadowplay, was published in March 2007. The third volume, Shadowrise, was published in March 2010, and the fourth volume, "Shadowheart" completed the series in November 2010. In July 2006, Williams started publishing a new six issue comic mini-series called The Next through DC Comics. A second series for DC Comics called The Factory is currently in planning stages. In addition, Tad wrote Aquaman: Sword of Atlantis for DC Comics starting with issue #50, a project which began in March 2007 and ended with issue #57. Tad Williams is also currently working on a series of young-adult books co-written with his wife Deborah Beale called Ordinary Farm. The first volume, The Dragons of Ordinary Farm was published in June 2009 and a second book, The Secrets of Ordinary Farm is expected June 2011. Three more volumes are planned.