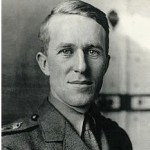 Lawrence was born on 16 August 1888 in Tremadog, Caernarfonshire, Wales, in a house named Gorphwysfa, now known as Snowdon Lodge. Lawrence attended the City of Oxford High School for Boys, where one of the four houses was later named "Lawrence" in his honour; the school closed in 1966. As a schoolboy, one of his favourite pastimes was to cycle to country churches and make brass rubbings. Lawrence and one of his brothers became commissioned officers in the Church Lads' Brigade at St Aldate's Church.
At the age of 15 Lawrence and his schoolfriend Cyril Beeson bicycled around Berkshire, Buckinghamshire and Oxfordshire, visited almost every village's parish church, studied their monuments and antiquities and made rubbings of their monumental brasses.  In the summers of 1906 and 1907 Lawrence and Beeson toured France by bicycle, collecting photographs, drawings and measurements of medieval castles. From 1907 to 1910 Lawrence studied history at Jesus College, Oxford. In the summer of 1909 Lawrence set out alone on a three-month walking tour of crusader castles in Ottoman Syria, in which he travelled 1,000 mi (1,600 km) on foot. On completing his degree in 1910, Lawrence commenced postgraduate research in mediaeval pottery with a Senior Demy, a form of scholarship, at Magdalen College, Oxford.
In December 1910 he sailed for Beirut, and on arrival went to Jbail (Byblos), where he studied Arabic. He then went to work on the excavations at Carchemish, near Jerablus in northern Syria, where he worked under D. G. Hogarth and R. Campbell Thompson of the British Museum. In late 1911, Lawrence returned to England for a brief sojourn. By November he was en route to Beirut for a second season at Carchemish, where he was to work with Leonard Woolley. Prior to resuming work there, however, he briefly worked with Flinders Petrie at Kafr Ammar in Egypt. Lawrence continued making trips to the Middle East as a field archaeologist until the outbreak of the First World War. In January 1914, Woolley and Lawrence were co-opted by the British military as an archaeological smokescreen for a British military survey of the Negev Desert.
Lawrence was fatally injured in an accident on his Brough Superior SS100 motorcycle in Dorset, close to his cottage, Clouds Hill, near Wareham. A dip in the road obstructed his view of two boys on their bicycles; he swerved to avoid them, lost control and was thrown over the handlebars. He died six days later on 19 May 1935. The spot is marked by a small memorial at the side of the road.