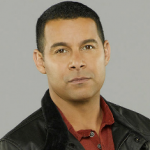 Jon Huertas was born in New York City, New York, USA. He is an American actor. He studied at John Handley High School, Winchester. He is best known for his role as Sergeant Antonio 'Poke' Espera in HBO's Generation Kill, Joe Negroni in the film Why Do Fools Fall in Love, and homicide detective Javier Esposito in Castle. Before pursing his acting career, he was enlisted in the United States Air Force in 1987 and he served there for 8 years as a pararescue jumper and nuclear weapons technician. His role in several films include: Executive Decision, Stealth Fighter, Buddy Boy, Picking Up the Pieces, El Gusano, Right at Your Door, The Insatiable, Believers, The Objective, Stash House, and Reparation. His role in television include: Moesha (TV series), Undressed (TV series), Borderline (TV film), Elementary (TV series), and This Is Us (TV series).