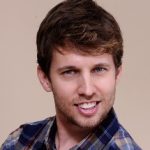 Jonathan Joseph Heder was born in Fort Collins, Colorado, USA. He is an American actor. He studied at Brigham Young University, Provo, Utah. His role in several films include: Napoleon Dynamite, The Benchwarmers, School for Scoundrels, Blades of Glory, Mama's Boy, When in Rome, For Ellen, Reality, Walt Before Mickey, Christmas Eve, Ghost Team, and The Tiger Hunter. His role in television include: Napoleon Dynamite (TV series, only voice) and Gulliver Quinn (TV film). He married Kirsten Bales in 2002. They have four children.