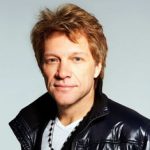 John Francis Bongiovi Jr., known as Jon Bon Jovi was born in Perth Amboy, New Jersey, USA. He is an American singer-songwriter, musician, record producer, philanthropist and actor. He studied at St. Joseph High School in Metuchen, New Jersey, and Sayreville War Memorial High School in Parlin, New Jersey. He is best known as the founder and frontman of the rock band Bon Jovi, that was formed in 1983. He has released 2 solo albums and 12 studio albums with his band, which to date have sold over 130 million albums worldwide, thus making them one of the World's Best-Selling Music Artists. As a songwriter, he was inducted into Songwriters Hall of Fame in 2009. He was a founder and majority owner of the Arena Football League team, the Philadelphia Soul. In 2010, President Barack Obama named Bon Jovi to the White House Council for Community Solutions. His role in several films include:  Moonlight and Valentino, The Leading Man, Little City, Destination Anywhere, No Looking Back, Homegrown, U-571, Pay It Forward, Cry Wolf, National Lampoon's Pucked, and New Year's Eve. He married Dorothea Hurley in 1989. They have four children.