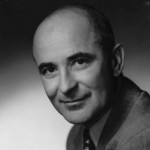 John Francis "Johnny" Burke was born in Antioch, California, USA. He was an American lyricist, successful and prolific between the 1920s and 1950s. His work is considered part of the Great American Songbook. His song "Swinging on a Star", from the Bing Crosby film Going My Way, won an Academy Award for Best Music Original Song  in 1945. He was inducted into the Songwriters Hall of Fame in 1970. He studied at Crane College in Chicago, and the University of Wisconsin-Madison. He began to write lyrics in collaboration with composer Harold Spina. In 1932, they wrote "Shadows on the Swanee", followed in 1933 by "Annie Doesn't Live Here Anymore", their first big hit for the Guy Lombardo Orchestra. In 1934, they wrote "You're Not the Only Oyster in the Stew", which was a novelty hit for Fats Waller, as was "My Very Good Friend, the Milkman". His seventeen songs were substantial hits, including "Pennies from Heaven", "I've Got a Pocketful of Dreams", "Only Forever", "Moonlight Becomes You", and "Sunday, Monday or Always".