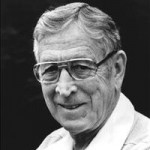 John Robert Wooden was born in Hall, Indiana, USA. He was an American basketball player and head coach at the University of California, Los Angeles from 1948-1975. He also served as head coach at Indiana State University from 1946-1948. He won ten NCAA national championships in a 12-year period as head coach at UCLA, including a record seven in a row. He earned a BA degree in English from Purdue University in 1932. He also won a Helms national championship at Purdue as a player 1931-1932 for a total of 11 national titles, a feat matched only by Geno Auriemma of NCAA women's basketball. He was inducted into the Basketball Hall of Fame as a player-1961 and as a coach-1973, the first person ever enshrined in both categories. He received the Sports Illustrated Sportsperson of the Year award 1972. On July 23, 2003, he received the Presidential Medal of Freedom (presented by President George W. Bush). He wrote several books, including They Call Me Coach, Wooden (with Steve Jamison), Coach Wooden One‑on‑One (with Jay Carty), Coach Wooden's Pyramid of Success (with Jay Carty), My Personal Best (with Steve Jamison), Wooden on Leadership (with Steve Jamison), The Essential Wooden (with Steve Jamison), A Game Plan for Life (with Don Yaeger), and The Wisdom of Wooden (with Steve Jamison).