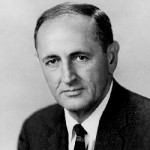 John William Gardner was born in Los Angeles, California, USA. He was an American educator, politician and author. From 1965-1968, he was Secretary of Health, Education, and Welfare under President Lyndon Johnson. He earned a BA degree in Psychology from Stanford University in 1935. He received his PhD in Psychology from the University of California at Berkeley in 1938. He served as Professor of Psychology at Connecticut College, at Mount Holyoke College, and at Stanford University. He was a trustee of the Stanford University from 1968-1982. He served as chairman of the Rockefeller Brothers Fund Panel on Education. He was the founder of two influential national U.S. organizations: Common Cause and Independent Sector. He was also the founder of two prestigious fellowship programs, The White House Fellowship and The John Gardner Fellowship at Stanford University and U.C. Berkeley. He wrote several books include: Excellence: Can We be Equal and Excellent Too?, Self-Renewal, No Easy Victories, The recovery of confidence, In Common Cause, Morale, On Leadership, and Living, Leading, and the American Dream. He received the Presidential Medal of Freedom in 1964 and the Public Welfare Medal in 1966.