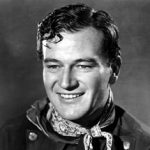 Marion Mitchell Morrison, known professionally as John Wayne and nicknamed Duke was born in Winterset, Iowa, USA. He was an American actor, film director and producer. He studied at the University of Southern California. His first leading role came in Raoul Walsh's widescreen epic The Big Trail, which led to leading roles in numerous B movies throughout the 1930s, most of them in the Western genre. His role in several films include: Stagecoach, Red River, Sands of Iwo Jima (Nominated- Academy Awards for Best Actor in a Leading Role), The Searchers, The Man Who Shot Liberty Valance, True Grit (Won- Academy Award for Best Actor 1970, Golden Globe Award For Best Actor 1970), The Quiet Man, Rio Bravo, The Alamo, The Longest Day, The Green Berets, and The Shootist. He directed several films include: The Alamo (also producer, Nominated- Academy Award for Best Picture) and The Green Berets.