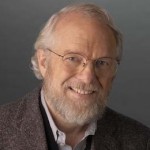 John Edward Warnock was born in Salt Lake City, Utah, USA. He is an American computer scientist, programmer, inventor, philanthropist and businessman best known as the co-founder with Charles Geschke of Adobe Systems Inc., the graphics and publishing software company. He has pioneered the development of graphics, publishing, Web and electronic document technologies that have revolutionized the field of publishing and visual communications. He earned a BS degree in Mathematics and Philosophy in 1961, an MS degree in Mathematics in 1964, and a PhD in Electrical Engineering in 1969, all degrees from the University of Utah. In his 1969 doctoral thesis, he invented the Warnock algorithm for hidden surface determination in computer graphics. In 2003 Warnock and his wife donated 200,000 shares of Adobe Systems valued at over $5.7 million to the University of Utah as the main gift for a new engineering building. He is a past Chairman of the Tech Museum of Innovation in San Jose. He also serves on the Board of Trustees of the American Film Institute and the Sundance Institute. He received many awards, including Bodley Medal, Lovelace Medal, National Medal of Technology and Innovation (by President George W. Bush), and Marconi Prize.