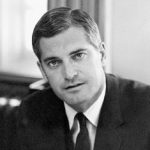 John Napier Wyndham Turner was born in Richmond, England. He is a Canadian lawyer and Liberal politician who served as the 17th Prime Minister of Canada from June 30, 1984 to September 17, 1984. He served as Leader of the Opposition from 1984-1990. He served as Minister of Finance, Minister of Justice, and Minister of Consumer and Corporate Affairs. He was a Member of Parliament for St. Lawrence-St. George, for Ottawa-Carleton, and for Vancouver Quadra. He also served as Attorney General of Canada, Solicitor General of Canada, and Registrar General of Canada. He graduated from the University of British Columbia with a BA Honours in 1949. He earned a BA degree in 1951, a Bachelor of Civil Law in 1952, and an MA degree in 1957 from the University of Oxford. He also pursued doctoral studies at the University of Paris from 1952 to 1953. He has written several books include: Politics of Purpose and The Wicked Kind. He received many honours and awards, including Rhodes Scholarship, Companion of the Order of Canada, Canadian Centennial Medal, Queen Elizabeth II Silver Jubilee Medal, Queen Elizabeth II Golden Jubilee Medal, and Queen Elizabeth II Diamond Jubilee Medal. He married Geills McCrae Kilgour in 1963. They have four children, one daughter and three sons.