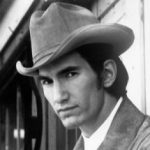 John Townes Van Zandt, best known as Townes Van Zandt was born in Fort Worth, Texas, USA. He was an American singer-songwriter. He studied at the University of Colorado at Boulder and the University of Houston. He is widely held in high regard for his poetic, often heroically sad songs. His song "Pancho and Lefty", scoring a number one hit on the Billboard country music charts. His albums list shown below: For the Sake of the Song, Our Mother the Mountain, Townes Van Zandt, Delta Momma Blues, High, Low and In Between, The Late Great Townes Van Zandt, Flyin' Shoes, At My Window, Rain on a Conga Drum, Rear View Mirror, and No Deeper Blue. He has written several songs include: "Waiting Around to Die", "If I Needed You", "Ain't Leavin' Your Love", and "Snowin' on Raton".