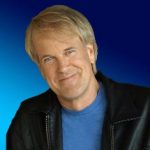 John Frank Tesh was born in Garden City, New York, USA. He is an American pianist, composer, radio host, news anchor, sportscaster, journalist and television presenter. He studied communications and music at North Carolina State University. His ten-year-old Intelligence for Your Life radio show airs on nearly 300 stations, and is syndicated by Teshmedia in the U.S., Canada, and the U.K. In addition, since 2014, he has hosted Intelligence for Your Life TV with his wife Connie Sellecca. He has won six Emmys, has four gold albums, two Grammy nominations, and an Associated Press award for investigative journalism. He has sold over eight million records. He wrote the NBA on NBC basketball theme "Roundball Rock" regarded as one of the most memorable sports themes of all time. He is also known as the co-host of the television program Entertainment Tonight. He has previously worked as a sportscaster and host for the Olympic Games, Wimbledon, the US Open, the Tour De France, and Ironman Triathlon.