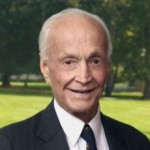 Sir John Marks Templeton was born in Winchester, Tennessee, USA. He was an American-born British investor, fund manager, philanthropist and author. He earned a BA degree in Economics from Yale University in 1934. He earned an MA degree in law from Balliol College, Oxford University as a Rhodes Scholar in 1936. In 1954, he entered the mutual fund market and created the Templeton Growth Fund. He was a founder of the John Templeton Foundation. He was a trustee on the board of Princeton Theological Seminary, for 42 years and served as its chair for 12 years. He was a Benefactor of Templeton College, Oxford University. He was one of the most generous philanthropists in history, giving away over $1 billion to charitable causes. He was created a Knight Bachelor in 1987 for his philanthropic efforts. In 1999, Money magazine named him "arguably the greatest global stock picker of the century." In 2003, he awarded the William E. Simon Prize for Philanthropic Leadership. He wrote several books include: The Humble Approach, Templeton Plan, Is Progress Speeding Up?, Golden Nuggets, Discovering the Laws of Life, Is God The Only Reality (with Robert L. Herrmann), Worldwide Laws of Life, Pure Unlimited Love, and Wisdom From World Religions.