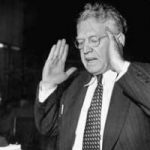 John Thomas Flynn was born in Bladensburg, Maryland, USA. He was an American journalist best known for his opposition to President Franklin D. Roosevelt and to American entry into World War II. He was also the first to advance the Pearl Harbor advance-knowledge conspiracy theory. He graduated at Georgetown Law School, Georgetown University. He became a journalist with the New Haven Register. In 1920, he moved to New York City and was appointed financial editor of the New York Globe. During the 1920s and 1930s, he wrote articles for such leading publications as The New Republic, Harper's Magazine, and Collier's Weekly. He supported Franklin D. Roosevelt for president but criticized the New Deal. He wrote several books include: God's Gold, Country squire in the White House, Men of Wealth, As we go marching, The Smear Terror, The Truth about Pearl Harbor, The Roosevelt myth, The Road Ahead, While You Slept, McCarthy, and Militarism: The New Slavery for America.