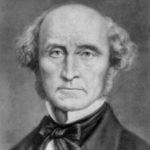 John Stuart Mill was born in Pentonville, London, England. He was a British philosopher, economist, politician, essayist and civil servant. One of the most influential thinkers in the history of liberalism, he contributed widely to social theory, political theory and political economy. He studied at the University College London. He was a proponent of utilitarianism, an ethical theory developed by his predecessor Jeremy Bentham. His career as a colonial administrator at the British East India Company spanned from when he was 17 years old in 1823 until 1858, when the Company was abolished in favor of direct rule by the British crown over India. A member of the Liberal Party, he was also the first Member of Parliament (for City and Westminster from 1865-1868) to call for women's suffrage. Between the years 1865 and 1868 Mill served as Lord Rector of the University of St. Andrews. He was godfather to the philosopher Bertrand Russell. He wrote several books include: A System of Logic, Principles of Political Economy, On Liberty, Considerations on Representative Government, Utilitarianism, The Subjection of Women (essay), and Three essays on religion. He married Harriet Taylor in 1851.