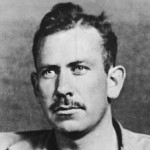 John Ernst Steinbeck, Jr. was born in Salinas, California, USA. He was an American novelist. He won the 1962 Nobel Prize in Literature "for his realistic and imaginative writings, combining as they do sympathetic humour and keen social perception". He studied at Salinas High School and Stanford University. During his writing career, he authored 27 books, including 16 novels, six non-fiction books, and two collections of short stories. He wrote several novels include: Cup of Gold, To a God Unknown, Tortilla Flat, In Dubious Battle, The Grapes of Wrath (Won- National Book Award and Pulitzer Prize for fiction), The Moon Is Down, Cannery Row, The Wayward Bus, The Pearl, East of Eden, Sweet Thursday, The Short Reign of Pippin IV, and The Winter of Our Discontent. He wrote several novellas include: The Red Pony, Of Mice and Men, and Burning Bright. He wrote several short stories include: The Pastures of Heaven and The Long Valley. His nonfiction works include: Bombs Away, A Russian Journal, The Log from the Sea of Cortez, Once There Was a War, Travels with Charley, America and Americans, and Journal of a Novel. He wrote several films include: The Forgotten Village and Viva Zapata!.