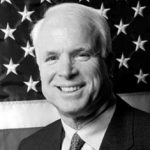 John Sidney McCain III was born in Coco Solo, Panama Canal Zone, USA. He is an American Republican politician serving as the senior United States Senator from Arizona since 1987. In 2015, he became chairman of the Senate Armed Services Committee. He entered the race for the Republican nomination for President in 2000, but he lost a heated primary season contest to George W. Bush of Texas. He was the Republican nominee for President of the United States in the 2008 election, which he lost to Barack Obama. He earned a BS degree from US Naval Academy, Annapolis, Maryland in 1958. He became a naval aviator and flew ground-attack aircraft from aircraft carriers. He retired from the Navy as a captain in 1981 and moved to Arizona, where he entered politics. In 1982, he was elected to the U.S. House of Representatives, where he served two terms. He received many awards, including Silver Star Medal, Bronze Star Medal, Purple Heart Medal, Legion of Merit, Distinguished Flying Cross, and Navy and Marine Corps Commendation Medal.