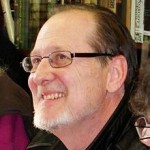 John Shirley was born in Houston, Texas, USA. He is an American novelist, short story writer, songwriter and screenwriter. As a musician, he has fronted his own bands and written lyrics for Blue Öyster Cult and others. An extensive compilation of songs by John Shirley, "Broken Mirror Glass" was released by Black October Records. He has written several novels include: Transmaniacon, Dracula in Love, City Come A-Walkin', Cellars, In Darkness Waiting, A Splendid Chaos, Wetbones, Silicon Embrace, Batman: Dead White, Borderlands: Gunsight, Wyatt in Wichita, and Grimm: The Icy Touch. He has written several short stories include: Heatseeker, New Noir, The Exploded Heart, Black Butterflies, Really, Really, Really, Really Weird Stories, Darkness Divided, and Living Shadows. He has written several films include: The Crow, The Night of the Headless Horseman, and The Tomb. He received many awards for horror works, including Bram Stoker Award and International Horror Guild Award.