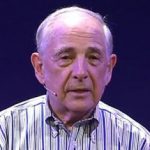 John Rogers Searle was born in Denver, Colorado, USA. He is an American philosopher. Widely noted for his contributions to the philosophy of language, philosophy of mind, and social philosophy. He earned all his university degrees, BA, MA, and PhD, from the University of Oxford, where he held his first faculty positions. He is currently Willis S. and Marion Slusser Professor Emeritus of the Philosophy of Mind and Language and Professor of the Graduate School at the University of California, Berkeley. He has written several books include: Speech Acts: An Essay in the Philosophy of Language, The Campus War, Expression and Meaning, Intentionality: An Essay in the Philosophy of Mind, The Rediscovery of the Mind, The Construction of Social Reality, The Mystery of Consciousness, Mind, Language And Society, Rationality in Action, Consciousness and Language, Mind: A Brief Introduction, Philosophy in a New Century, Making the Social World, and Seeing Things as They Are. In 2000, he received the Jean Nicod Prize; in 2004, the National Humanities Medal; and in 2006, the Mind & Brain Prize.