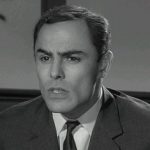 John Saxon was born in Brooklyn, New York City, New York, USA. He is an American actor and martial artist. He is known for his work in westerns and horror films as well as for his role as Roper in the 1973 film Enter the Dragon. He studied at New Utrecht High School, graduating in 1953. He then studied acting with famous acting coach Stella Adler. He is proficient in Judo and Shotokan Karate. His role in several films, including Running Wild, The Unguarded Moment, Summer Love, This Happy Feeling, The Big Fisherman, The Unforgiven, Posse from Hell, Agostino, The Cardinal, The Night Caller, The Swiss Conspiracy, Violent Naples, A Special Cop in Action, Shalimar, The Electric Horseman, Wrong Is Right, A Nightmare on Elm Street, Nightmare Beach, Hellmaster, From Dusk till Dawn, Trapped Ashes, and God's Ears. His role in television, including The Bold Ones: The New Doctors (medical drama), Once an Eagle (miniseries), and War Wolves (TV film).