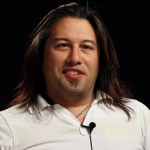 Alfonso John Romero was born in Colorado Springs, Colorado, USA. He is an American game designer, video game programmer, video game developer and game director in the video game industry. He is best known as a co-founder of id Software and designer for many of their games, including Wolfenstein 3D, Dangerous Dave, Hexen, Doom and Quake. His first published game, Scout Search, appeared in the June 1984 issue of inCider magazine, a popular Apple II magazine during the 1980s. He founded several organizations, including Ion Storm (with Tom Hall), Slipgate Ironworks, Monkeystone Games (with Tom Hall and Stevie Case), Romero Games Ltd., and Loot Drop (with Brenda Romero).