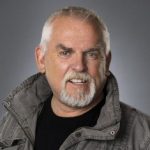 John Dezso Ratzenberger was born in Bridgeport, Connecticut, USA. He is an American actor and voice actor. He is best known as Cliff Clavin in the TV show Cheers, for which he earned two Emmy nominations. He earned a BA degree in English from Sacred Heart University in Fairfield, Connecticut. He moved to London in 1971 and stayed there for 10 years. His role in several films include: The Ritz, Twilight's Last Gleaming, A Bridge Too Far, Superman, Arabian Adventure, The Bitch, The Empire Strikes Back, and What If... His role in several films (only voice) include: Gandhi, Toy Story 2, Finding Nemo, Ratatouille, Planes, The Good Dinosaur, Finding Dory, and Coco. His role in television include: The Good Soldier (TV film), Combat Academy (TV film), Timestalkers (TV film), Made in America (documentary, host), and Legit (TV series).