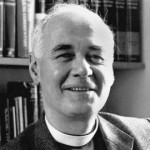 John Charlton Polkinghorne was born in Weston-super-Mare, Somerset, England. He is an English theoretical physicist, Anglican priest and author. He earned a bachelor’s degree in Mathematics in 1952 and his PhD in Physics in 1955 both from Trinity College, Cambridge. A prominent and leading voice explaining the relationship between science and religion, he was professor of mathematical physics at the University of Cambridge from 1968 to 1979, when he resigned his chair to study for the priesthood, becoming an ordained Anglican priest in 1982. He served as the president of Queens' College, Cambridge from 1988 until 1996. He was knighted by Queen Elizabeth II in 1997 for distinguished service to science, religion, learning, and medical ethics. He was awarded the 2002 Templeton Prize for Progress Toward Research or Discoveries About Spiritual Realities. He has written several books include: The Quantum World, The faith of a physicist, Belief in God in an Age of Science, Science and Theology, Quantum theory, Quantum Physics and Theology, Exploring Reality, From physicist to priest, and Questions of Truth.