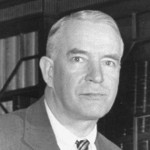 John Phillips Marquand was born in Wilmington, Delaware, USA. He was an American novelist. One of his abiding themes was the confining nature of life in America's upper class and among those who aspired to join it. He studied at Newburyport High School in Newburyport, Massachusetts and Harvard University. After graduating in 1915, Marquand was hired by The Boston Evening Transcript, working initially as a reporter. He wrote several novels include: The Late George Apley (won- Pulitzer Prize for Fiction 1938), Wickford Point, H.M. Pulham, Esquire, So Little Time, Repent in Haste, B.F.'s Daughter, Point of No Return, Melville Goodwin, U.S.A, Sincerely, Willis Wayde, and Women and Thomas Harrow.