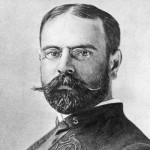 John Philip Sousa was born in Washington, D.C., USA. He was an American composer, conductor, inventor and songwriter, known primarily for American military and patriotic marches. Among his best-known marches are "The Stars and Stripes Forever", "Semper Fidelis", "The Liberty Bell", "The Thunderer" and "The Washington Post". In 1867 he began to follow the career of his father as a trombonist, but later he took engagements as an orchestral violinist and served as a conductor. He also began composing. In 1868, he enlisted in the U.S. Marine Corps as an apprentice in the Marine Band. In 1892 he formed his own band, a carefully selected group capable of equal virtuosity in both military and symphonic music; with it he toured the United States and Europe and finally made a world tour. He wrote at least 70 songs, 11 waltzes, 12 other dance pieces, 11 suites, 14 humoresques, and 27 fantasies. In the 1890s he also redeveloped a type of bass tuba called the helicon, made to his specifications and eventually called the sousaphone. He wrote three novels, including The Fifth String, Pipetown Sandy, and The Transit of Venus-as well as a full-length autobiography, Marching Along.