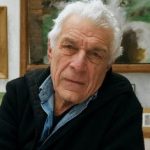 John Peter Berger was born in London, England. He was an English art critic, novelist, painter, essayist and screenwriter. He studied at St Edward's School in Oxford, Chelsea School of Art, and the Central School of Art in London. He began his career as a painter and exhibited works at a number of London galleries in the late 1940s. He taught drawing at St Mary's teacher training college. He wrote several novels include: A Painter of Our Time, The Foot of Clive, Corker's freedom, G. (Won- Booker Prize for Fiction 1972, James Tait Black Memorial Prize for Fiction 1972), Pig Earth, Once in Europa, Lilac and Flag, To the Wedding, and From A to X. He wrote several essays include: Permanent Red, Toward Reality, and The Look of Things. He wrote several books (art criticism) include: Success and Failure of Picasso, Ways of Seeing, About Looking, and Keeping a Rendezvous. He wrote several films include: The Salamander, Middle of the World, Jonah Who Will Be 25 in the Year 2000, and Play Me Something.