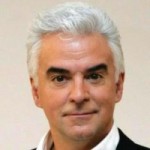 John George O'Hurley was born in Kittery, Maine, USA. He is an American actor, author and game show host. He is known for the role of J. Peterman on the NBC sitcom Seinfeld, and was host of the game show Family Feud from 2006 to 2010. He graduated from Providence College in 1976 with a BA in Theatre. His role in several films include: Love Stinks, Race to Space, Buying the Cow, An American Carol, and Christian Mingle. His role in television include: Santa Barbara (TV series), Valley of the Dolls (TV series), Over the Top (TV series), To Tell the Truth (game show host), The Great American Celebrity Spelling Bee (game show host), The Mullets (TV series), and Duck Dodgers (TV series, only voice). He has written several books include: It's Okay to Miss the Bed on the First Jump, Before Your Dog Can Eat Your Homework, First You Have to Do It, and The Perfect Dog.