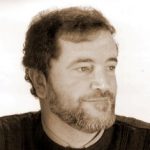 John O'Donohue was an Irish poet, author, priest and Hegelian philosopher. He earned degrees in English, Philosophy, and Theology at St Patrick's College, Maynooth. He was ordained as Catholic priest on 6 June 1979. He received his PhD in philosophical theology from Eberhard Karls University, Germany. In 1990, he returned to Ireland to continue his priestly duties, and began his post-doctoral work on the 13th century mystic, Meister Eckhart. He wrote several books include: Echoes of memory (poetry), Anam Cara, Eternal Echoes, Conamara blues (poetry), Divine Beauty, Benedictus, To Bless the Space Between Us, and The Four Elements (essays).