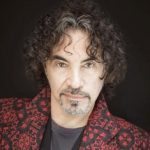 John William Oates was born in New York City, New York, USA. He is an American guitarist, songwriter, singer and  record producer best known as half of the rock and soul duo, Daryl Hall & John Oates. He enrolled in Temple University in Philadelphia, where he met Daryl Hall. He co-wrote many of the Top 10 songs that they recorded, including (with Daryl Hall): "Sara Smile", "She's Gone", and "Out of Touch", as well as (with Sara Allen and Daryl Hall): "You Make My Dreams", "I Can't Go for That (No Can Do)", "Maneater", and "Adult Education". He also co-wrote and sang backup on the song "Electric Blue", recorded by the Australian band Icehouse, which was a Billboard Top Ten hit. His albums list shown below: Phunk Shui, 1000 Miles of Life, and Arkansas. He was inducted into the Songwriters Hall of Fame in 2004. He was inducted into the Rock and Roll Hall of Fame in 2014, as a member of Hall & Oates. His memoir, Change of Seasons (with Chris Epting) was published in 2017.